My favourite teachers in Film/TV

You know, I was quite lucky growing up to have some really incredible and inspiring teachers. I tell this story all the time, but I think it's worth repeating. I always loved school and learning, but I can't remember now if my second grade teacher inspired that love of learning or if he just did all he could to encourage it. Mr. Jacobson was wonderful. He let me borrow his Highlights magazines and worked extra hard with me to improve my reading and let me explore and become excited and passionate about books. I'd look forward to coming into school and to talking with Mr. J. And the feeling was very much mutual. My dad told me later how much Mr. Jacobson raved about me as a student and the two of them kept in contact after the school year finished. Sadly, Mr. J had a stroke during one of our music classes shortly before the year ended and we ended up with a substitute teacher for the rest of second grade.

Either way, Mr. Jacobson will forever stay in my mind as my absolute favourite teacher ever. He was passionate and enthusiastic about the things that he taught and he did it in such a way that really captured my imagination.

I'm sure growing up, my dad realised how much of an affect this one teacher had on me, so a lot of the movies and television programmes below were watched with just me and my dad. This is definitely a huge advantage to them appearing on such a list of favourites, cheesy though some of them are! 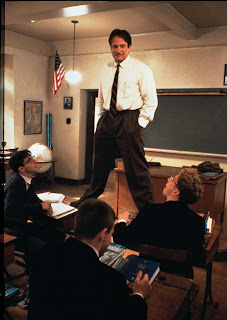 Mr. Keating from Dead Poet's Society - I really adore Dead Poet's Society. I love message of free-thinking and questioning this rather strict and traditional prep school. I love the references to Walt Whitman and poetry and the way in which this one teacher really affects the students and their ways of thinking. I love how the boys in Mr. Keating's class go on to explore poetry in expression of thought in different ways, even going against some the wishes of their headmaster or parents. I always love coming back to this film. 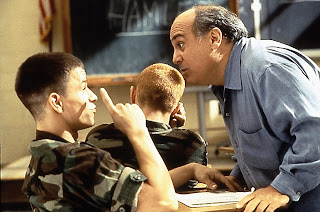 Rago from Renaissance Man - In a slightly different film, Danny DeVito plays a teacher trying to improve the literary skills of some Army soldiers. I'm pretty sure it was a commercial flop, but whatever. I really loved it. I love the idea of these mostly semi-literate group of people being inspired by Shakespeare. I cheered when one of the soldiers delivers that famous speech from Henry V and of course I love a good underdog film - when this classroom of misfits all pass the final test? Hurrah. 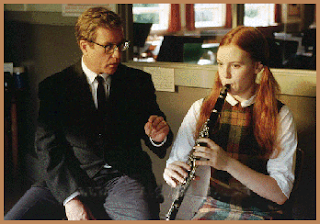 Mr. Holland from Mr. Holland's Opus - I think perhaps the reason our family was keen to watch this film is that it's mostly set in a fictional high school in Portland, Oregon (near where I used to live). I feel like I'm really attracted to music both in books and in stories on film and television, but this film was just really sweet and interesting. Telling the story of a music composer who takes a temporary job teaching high school music classes and ends up with a 30 year career out of it. There are the ups and downs of dealing with decreasing funds and social changes as well as that of Mr. Holland's son, born deaf. Through it all, you can still see how much his classes have affected his students, especially at the end when they gather together to perform the piece of music that Mr. Holland has been creating for decades. *sheds tear*

Mr Feeny in Boy Meets World - Do you guys remember Boy Meets World? I used to absolutely love this show. I think there was some really great family entertainment on television when I was growing up (Family Matters, Step by Step, Full House etc) and one of my favourites was Boy Meets World. And I loved the great relationship between Mr Feeny and both Eric and Shawn. As neighbours, teacher/student and as friends. Wonderful stuff. 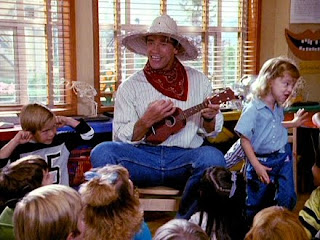 Mr. Kimble from Kindergarten Cop - Am I losing all credibility here with the inclusion of this film? Probably, but oh well. I think it's the journey that Arnold goes through that appeals to me the most. He starts off completely clueless (not being a teacher and having no experience with children, obviously!) and he's tearing his hair out trying to find his feet and get a bunch of five year olds to calm down and listen. But slowly but surely he finds his own methods to gain order and fun. It's pretty amusing as well as sweet and I remember laughing with my family watching this when I was younger. 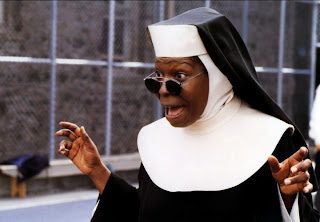 Sister Mary Francis from Sister Act 2 - Yeah, yeah. Nobody really likes the second Sister Act film, right? Well I loved them both. The first for the music and the second because of Lauryn Hill. And the dancing. In similar ways to other films on this list, Sister Act 2 is all about getting people who don't care about school or singing in particular into really caring and taking part. And I like that inspirational aspect a lot. Finding that special way in order to connect with somebody else. 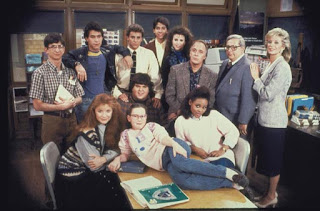 Charlie Moore from Head of the Class - I can't say that I remember that much about this television programme. My dad and I watched it every week and I remember we used to have long discussions about it. It's about this group of really smart kids in New York City (I believe) and the show follows them in their high school experiences. There's really super geeky kids, a child progidy, kids competing for valedictorian. I don't know, I really remember it fondly.