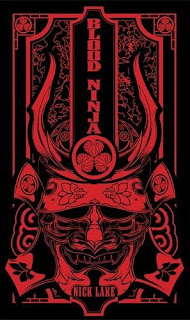 Blood Ninja by Nick Lake is full of action, twists and turns and suspense. When his father is murdered in front of him, Taro has to run for his life with the aid of his saviour, a ninja called Shusaku and accompanied by his friend, Hiro. However, the murderers; ninjas in the pay of Lord Oda, manage to run Taro through with a sword and all hope seems to be lost. But something unexpected happens. Shusaku bites him and transforms him into a vampire.

Travelling with the mysterious Shusaku, Taro worries for his mother who has run away to safety, grieves for his father and wants to seek vengeance. He has so many questions that Shusaku does not answer. Why would anyone want to kill his parents who are only peasants and have never hurt anyone? Eventually, Taro learns the incredible truth about his heritage and understands just why he is being hunted down.

Blood Ninja was a good book. I was drawn to it because I am a great fan of action and add to that Japanese history and I was hoping for something that would blow me away. It did have loads of interesting twists and turns that I didn’t see coming and I liked the plot overall. However, I did feel that it needed more development. Likewise, most of the characters, even Taro, weren’t developed enough for me to care about them. There isn’t much of an introduction to Taro, his parents and his friendship with Hiro before he’s running for his life.

Many of the characters did things without any seeming indication or clue as to what they were thinking, especially Taro. It was really hard to know what he was thinking and feeling, especially when they changed so quickly. For instance, he accepted that he was a vampire almost instantly.

Lord Oda, the villain, was grotesque. He kills anyone as long as he gets what he wants. The climax of the story was great and there are a few shocks at the turn of events at the end of the story, leaving room for a sequel. Overall, Blood Ninja was a memorable story with lots of blood, gore and guts. I would recommend it to fans of Tarantino movies and those looking for action over character development.

Sounds a bit different! Thanks Kulsuma!
Written by Michelle Fluttering Butterflies at 08:40