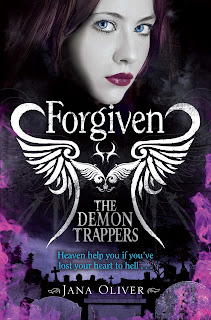 In Forgiven, the third in The Demon Trappers’ series by Jana Oliver, Riley Blackthorne is back. She’s not the naive girl from Forsaken anymore. Since her father’s untimely death, she’s had to do a lot of growing up. Although she has friends that she can depend on, time and again, loyalties and relationships are tested.

Riley’s life is made more complex due to the suspicions mounting against her. The Demon Hunters think she’s working for hell. She’s really working for heaven. Can her life become any more complicated? Turns out that yes, it can. Beck can’t forgive her for her mistake and Ori won’t let her forget him.

Forgiven was a fantastic addition to The Demon Trappers series. After the shock and joy of finally finding her reanimated father, Riley has to face her mistakes. She isn’t one to sit and sulk over things that have gone wrong- and there was plenty going wrong- she picks herself up and moves on.

What I liked about Forgiven were the explosive action scenes- I wish there were even more of them and that Riley had learnt some more skills. It was great that so many more characters were developed in this book such as Mort, Ayden and Peter.

My favourite parts to read were pretty much every scene between Riley and Beck. It was wonderful to see their relationship growing. The turn of events at the end is a great set up for the next book where Riley’s life is going to become more even more difficult.

There was a fair amount of action at the climax of Forgiven, but I’m expecting even more from the next and final book, Foretold. I can’t wait to read more about Riley and Beck, about Beck’s mysterious past and about the other characters, especially Ori. I really enjoyed Forgiven.

Thank you, Kulsuma!
Written by Michelle Fluttering Butterflies at 08:16