REVIEW: I Predict A Riot by Catherine Bruton 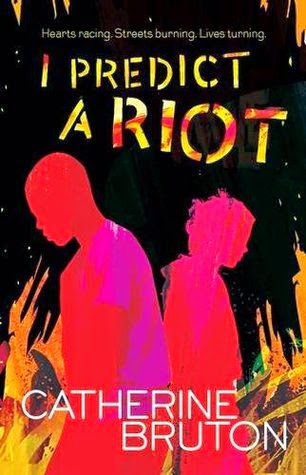 I Predict A Riot by Catherine Bruton very quickly became one of my favourite reads of the year so far.  It's a very engaging and emotional read, very thought-provoking and has some wonderful characters and relationships between them.  I really loved reading this book and had tears in my eyes by the end of it.

First off, I loved the structure of the book which is told from the perspective of our main character, Maggie, as she is secretly filming the events of her neighbourhood. The chapters are all based around specific scenes that Maggie has filmed in different locations around the main street, Coronation Road.  I Predict A Riot was inspired by the London Riots in 2011 and there were quite a few similarities between this story and actual events.

And at first, I was reading this book and comparing this story and its characters with what I remembered happening three years ago.  The area that Maggie and her friends are in is an area of London with a big class divide. There are families like Maggie's (whose mum is the local MP) who attends a boarding school and live in luxury alongside families like Tokes' whose mother works several jobs to pay the rent on a poky bedsit. There is also a large gang culture that is rampant, and our third main character, Little Pea is a 12 year old boy who has been caught up in the Starfish Gang and cannot see a future for himself outside of it. I Predict A Riot tells us this story of events that are leading up to the London riots including allegations of police brutality and protests but one of the things that I loved so much about it is that Catherine Bruton gives us this story without judgement. We witness characters saying and doing questionable things for their own reasons but each of those reasons are laid out and are true to Maggie, Tokes and to Little Pea.  I loved that about this book.

Because while I started this book making the comparisons to the rioting, I finished this story knowing definitely that while the riots were the background for this story, I Predict A Riot is really a story about a hope for change and it is a story about friendship and about being true to yourself and making the decisions that you can live with.  I loved the story arc for all three of the main characters.  I loved how each of them are very different and have different sets of principles and beliefs in what is right and wrong but that these principles are tested in really difficult situations.  Some characters surprised me by the mistakes they made, the strength of their convictions and about the ways in which they changed throughout the story.

I was really surprised by this book.  I was surprised by the depth of my feelings for Maggie, Tokes and Little Pea. I thought Catherine Bruton did an amazing job of pulling me into the narrative of this book and really connecting me to that of these three characters. It was really interesting to see different sides to this story from three characters with such wildly different backgrounds and the way in which their stories overlapped.  I really highly recommend this story!
Written by Michelle Fluttering Butterflies at 07:55