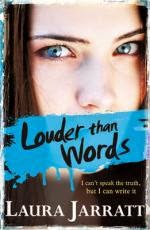 I really enjoyed Louder Than Words by Laura Jarratt. As a massive fan of Laura Jarratt's previous novels, Skin Deep and By Any Other Name, I was always going to be excited to read the author's latest... and while I don't think that Louder Than Words hits the same emotional high as I've experienced with the author's previous stories, I did still find it really addictive reading and incredibly interesting.

Louder Than Words is mostly told from the perspective of Rafi, a teenager girl who has selective mutism, which means that she hasn't spoken in many years.  Instead of words spoken out loud, Rafi really does better expressing herself with the written word.  And while Rafi is keen to point out at the beginning of the novel that this is her brother Silas's story, it actually feels like a combination of stories of all three main characters, Rafi, Silas and Josie, and it was nice to see contributions from Silas and Josie throughout the book.

Rafi was a really wonderful narrator, warm, funny and relatable.  My heart really went out to her right from the start as we learn more about what selective mutism is and how it has affected her life and her family's life. At all times throughout this story I really wanted Rafi to be happy and okay with who she is.  I wanted to get to the bottom of what has caused Rafi's problems with verbal communication and I wanted to see her take steps towards happiness and I loved seeing her progression with this in her friendship with Josie and during therapy sessions.  Rafi's story takes up the bulk of this book and it was definitely my favourite aspect of Louder Than Words.

Josie's story, however, while still really interesting takes up less page time.  I loved her though.  I think she was a wonderful friend to Rafi and she was pretty great at seeing through things.  We meet Josie right at the beginning as she's dealing with rumours spread by her ex-boyfriend and is being bullied and ostracised by her friends and classmates.  In some ways, Josie is the catalyst of the entire story as she is the person who spurs Rafi into action with her speech and in Josie's defense Silas gets involved in something bigger than himself.

Silas is the character that was most intriguing to me.  While we see through Rafi's perspective and get her thoughts and feelings through her narration and while we see snippets of Josie through brief Pinterest quotes, we only ever see Silas in the first person through a handful of letters that he's written to his father.  I found this really intriguing and I loved the format and structure of the book in this way.  I really loved Silas.  At the beginning of the story, he was an amazing support network for Rafi and he really looked out for her.  However, once we met Lara and started having feelings for her, he seemed to change and his priorities and interests expanded to more ...dubious activities. I do love that an aspect of political activism has been included in this book.  I'd really like to see more included in YA fiction as I think it's something that teenagers should have their eyes opened to from a young age.

All in all, Louder Than Words was a fascinating book for me.  I thought it was made up of some amazing characters, each with their own really emotional relationships.  In particular, I love the sibling relationship between Silas and Rafi and also the strong friendship between Rafi and Josie.  I thought both were really important to the story and were very well written.  I'm really happy to have read this book and can highly recommend it! Will certainly be looking out for more books in the future by Laura Jarratt...
Written by Michelle Fluttering Butterflies at 08:00