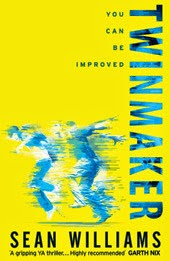 I couldn't wait to start reading Twinmaker by Sean Williams because not only was the blurb gripping, but Scott Westerfeld recommended it. I really enjoyed The Uglies series and it seemed to me that Twinmaker might have some things in common with it. Set in the future, Twinmaker is set in a world where the use of revolutionary technology has made life so much easier. A technology called D-MAT means that people can transport from one place to another in the world almost instantaneously making cars, planes and trains useless. Fabbers can make clothes and food for everyone on the planet; no more hunger, no more need to work. The implants which give you access to the Air ensures you can update the world on your status instantaneously.

When Clair’s friend Libby reveals she uses a meme called ‘Improvement’ which promised to remove any flaw she wishes, namely the birthmark on her face, Clair is worried because Improvement is illegal. However, before Clair can actually find out if Improvement worked on Libby, Libby leaves and only turns up for short periods throughout the book and Clair is unable to work out if Improvement has indeed worked on her friend. She recruits the help of an ‘Abstainer’ (a person who refuses to use any of these modern technologies because of possible effects). Through trying out to find out the truth about Libby, Clair puts herself in danger and before long, she is on the run, cutting ties with the world she has known her whole life.

Twinmaker was a long, highly complex book in terms of the amount of technology discussed as well as story threads. It took some time to get into the book. The beginning put me off as it featured Clair disrespecting her friendship with Libby by cheating with Libby’s boyfriend, Zeppelin. Furthermore, I didn’t feel as though Clair and Libby’s friendship was shown enough at the beginning for me to want to know if Libby would be okay. However, the story soon picked up and became packed full of fervent action; hardly stopping for pause. I really enjoyed all the action and guessing what would happen next. The story was full of twists and turns and had a high body count.

I really liked Jesse and Q; a mysterious character who contacts and helps Clair from a distance at the beginning of the story and who Clair, along with the reader, desperately tries to figure out. Improvement, Clair finds out, is bad but there are those who will stop at nothing to ensure Clair doesn’t find out the whole truth and publicise the matter. What really redeemed Twinmaker in my eyes was the ending, which was simply incredible. The last hundred pages were so well-written and full of so many revelations that I can’t wait to read the next book, Crashlanders to find out what happens next.

Intriguing! Thank you, Kulsuma!
Written by Michelle Fluttering Butterflies at 08:00