REVIEW: The Curious Tale of the Lady Caraboo by Catherine Johnson 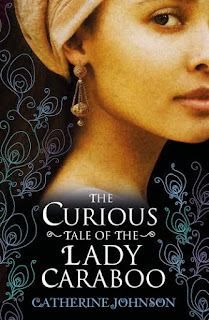 I'd really been looking forward to reading The Curious Tale of the Lady Caraboo by Catherine Johnson for awhile now.  So I was very happy to get a copy sent to me and jumped in straight away.

And I really liked this story.  It's based on a true story of an actual young woman called Mary Willcox who managed to convince a wealthy family that she was a princess from the South Seas and that makes this story even more fascinating to me.  I know that Catherine Johnson did change some aspects of the story but I still think the original basis of what happened to Mary Willcox to be incredibly interesting.  As is this book! I really didn't know what was going to happen throughout the story and I was really intrigued from the moment I started reading.

The Curious Tale of the Lady Caraboo has sort of a harrowing beginning. As we see poor Mary Willcox in bad shape and she is further attacked by some men and in that moment she decides that things will be different from now on.  And that's what happens.

She pretends to be this different person, this princess from Java. And it becomes quite an elaborate lie that is spun as Caraboo manages to convince this local wealthy family, the Worralls,  that she is in fact royalty and they take her in for several months. An entire language is created as well as a religion and a style of dress and mannerisms that Caraboo creates herself. At times both Caraboo (and surely the reader!) are sort of preparing for this lie to be caught out and for Caraboo to be sent packing ... but things carry on for a very surprising length of time.

I really liked the character of Caraboo that Mary Willcox pretends that she is.  Caraboo becomes this fierce warrior princess who hunts and climbs and does what she likes. It really felt like she had decided not to be held back by her gender or her (lack of) wealth and just decided to become this person she and society had never allowed her to become until one day when she just makes that decision and a transformation happens.

As well as being incredibly interested and invested in Caraboo's character and how she gets on, I was also really fascinated to see the changes within this family that Caraboo is staying with and the different reactions they all have to Caraboo's intrusion into their lives. There is Mrs Worrall, who seems to relish the attention as well as the fact that she is at the centre of a scientific investigation and has scientists of the day from phrenologists to electricity experts, coming into her house and that she is able to participate in something larger than her in her every day life.

And then there are the Worrall children: flighty Cassandra and skeptical Fred who in turns befriend and question Caraboo's sincerity and actions. Cassandra and Fred really shouldn't be likeable characters. They are both overly privileged and entitled and yet still, I found myself warming to both characters a great deal.  I liked that Cassandra and Caraboo formed this friendship and that Fred seemed to struggle with his relationships with women after a comment made to him by a prostitute. I also loved the juxtaposition of Cassandra's love affair with that of the reluctant growing of feelings that happens for Caraboo.

I thought Lady Caraboo's story was an incredibly fascinating story. It felt like a story of choices and love and about being the person who most want to be. I loved this glimpse into a POC historical figure and time period and I was swept away by the circumstances of Caraboo's life. Really enjoyed this one!
Written by Michelle Fluttering Butterflies at 07:55