As most of you might know by now, I don't generally watch a lot of television programmes.  I might write more about that another time because there are Reasons, but for now I thought I might share with you some of the TV stuff I have been watching.

All of the below are documentaries that I've been watching and loving lately.  I think this is why I always think to myself that I really must read more non-fiction.  Because I watch this stuff and it actually really inspires me. It makes me want to learn more and find out more cool stuff. Either that or it pisses me off. One or the other. 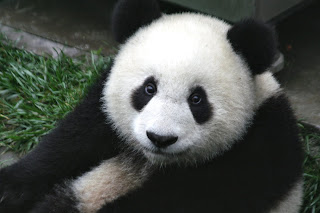 We recently watched a documentary about meerkats and another about pandas. Both were amazing.  The one about pandas was the story of China's struggles to both breed pandas in captivity and also to release pandas back into the wild. It was really interesting to see the ways in which Chinese children are being educated about the plight of pandas and how much money and effort is going towards protecting these animals.  It kind of followed one particular zoo keeper as she went about her daily routine.  She looked like she had the best job in the entire universe as she was shown playing about with the more adorable panda pups.  It ended with the release of a panda into the wild but I believe that the panda release programme hasn't been as successful as hoped.

The meerkat documentary (for which I'm very sad not to have caught the name) was another level of animal documentary.  I actually felt very, very emotional throughout the entire show.  We watched it as a family because E was planning to write a report on meerkats for a school project and while it was incredibly educational and informative, I was very surprised that it made tears come to my eyes after the meerkat leader had to banish her own daughter from the meerkat mob. Sob city.

This two part documentary on the world's most expensive food mostly made me incredibly, incredibly angry.  The world's most expensive food is apparently beluga caviar which sells at 24,000 pounds per tin.  We were also introduced to a 300 pound cup of coffee that is supposed 'worth it' because the coffee is made from a cat eating the coffee bean, digesting it and the coffee itself is made from the waste product of this animal.

While I found some of these facts interesting what upset me is that we're living in a time of such disparity between the world's richest and poorest and I could find very little sympathy or enthusiasm for the clientele for such products.  They all seemed to be buying into these things in order to appear wealthy or to show off to their friends.  One of the worst aspects of the show is that the idea of a 'story' behind some of these things makes it a draw for the wealthy. One person went so far as to say the fact that this food item KILLED people on a regular basis makes for a great story over the course of a dinner party. Lives apparently don't matter, only a cool story.

And finally, we've been watching the World's Most Extreme series which featured roads, bridges, tunnels, railways and rivers.  Some of the programmes were more interesting than others.  There always seemed to be 2 or 3 of each show that were a little dull side of 'extreme' but for the most part, I really watching these shows and seeing a very diverse range of extremities. It was always interesting to see when a road or tunnel or bridge were put into place to solve a problem and I loved the combination of travel and roads/tunnels etc.

And I think the bridges segment was by far my favourite. It showed some really interesting bridges and I was really fascinated by some of them. The aspects of engineering that had to be considered, the way the environment helped and hindered these projects. I didn't actually realise how much of an interest I had in architecture or engineering before I watched this show!


So that's what I've been watching lately, how about you?
Written by Michelle Fluttering Butterflies at 08:00

Email ThisBlogThis!Share to TwitterShare to FacebookShare to Pinterest
Labels: personal wednesdays, what i've been watching