I don't normally have such a lot of library books out at one time, but it just happened that all the books I wanted to read were available at the same time! Also, some leftover loot include two books by David Almond and a YA Terry Pratchett novel. 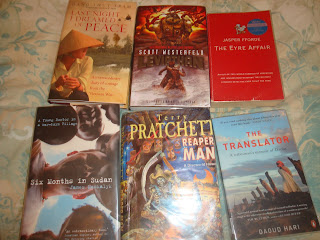 Last Night I Dreamed of Peace by Dang Thuy Tram - I actually was looking for a book about a boy soldier, instead I found the section of the library that contained the two Sudan books above and this diary of a woman during the Vietnam war. This year's War Through the Generations reading challenge is focusing on Vietnam. I thought I would try to unofficially participate.

The Eyre Affair by Jasper Fforde - Recommended to me by a friend and blog reader! Plus, Fforde's new book Shades of Grey sounds pretty good!

Six Months In Sudan: A Young Doctor in a War-Torn Village by James Maskalyk - another book about Sudan.

The Translator by Daoud Hari - A book about Sudan. After Maw Books did her Reading For Darfur I've been meaning to read books about the situation going on there. 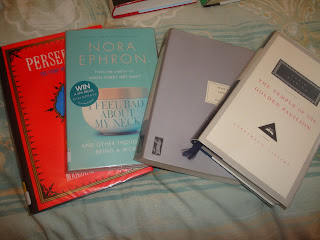 I Feel Bad About My Neck And Other Thoughts About Being a Woman by Nora Ephron - finished. Review soon.

Miss Pettigrew Lives For A Day by Winifred Watson - Picked up after watching the movie! Thought the movie was absolutely charming, book must be better! Also, it's included on the 1001 Books to Read Before You Die list.

The Temple of the Golden Pavilion by Yukio Mishima - Picked up after it was mentioned on the Japanese Literature Book Group over at In Spring it is the Dawn. 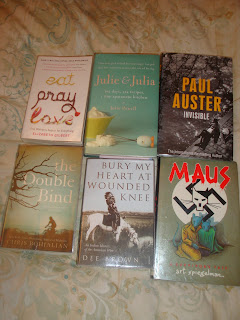 Julie and Julia by Julie Powell - I haven't seen the film, but it looks interesting. Maybe I'll have to read it and then watch the film.

Invisible by Paul Auster - Paul Auster is possibly my favourite ever author and this is his latest. Super excited about this one.

The Double Bind by Chris Bohjalian - A long time ago I read Midwives by Bohjalian and it was really great. I thought I'd try another one.

Bury My Heart at Wounded Knee by Dee Brown - In my quest to read more non-fiction, I remembered this book. My old manager at the bookstore where I used to work kept mentioning this book. Being Native-American myself, it's always an interest of mine to read books by or about other Native Americans.

Maus by Art Spiegleman - the book I'm currently reading, and another favourite of book-bloggers. 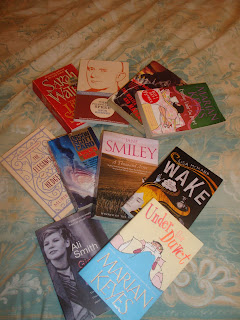 The Little Stranger by Sarah Waters - I had to buy this book. I did start reading it awhile back, but I had to return it before I was finished.

The Polysyllabic Spree by Nick Hornby - I've read so many positive reviews about Hornby's essays on reading that I had to try it.

The Master and the Margarita by Mikhail Bulgakov - I can't remember who mentioned it now, but this book was mentioned somewhere and it sounded intriguing.

Further Under the Duvet by Marian Keyes - I do love Marian Keyes and after reading some of Nora Ephron's essays, I thought I'd read what Marian has to say about things.

The Elegance of the Hedgehog by Muriel Barbery - Positive reviews by book bloggers!

Ender's Game by Orson Scott Card - A fair few people have mentioned how wonderful this book is, so I thought I'd better give it a chance.

A Thousand Acres by Jane Smiley - I think I watched the film many years ago but I saw it on a list of possible books for the Women Unbound challenge.

Wake by Lisa McMann - Again with you book bloggers!

Girl Meets Boy by Ali Smith - This book is part of the Myth series, where popular authors (such as Margaret Atwood with The Penelopiad) retell myths. I've never read Ovid or Ali Smith, but why not?

And there we have it. Where do I possibly begin?! What books have you picked up lately?
Written by Michelle Fluttering Butterflies at 12:00