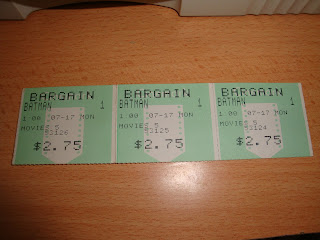 Do you remember how old you were when you first went to the cinema? N and I have been thinking lately of taking Elliot. Is three too young for the cinema? We've taken him to a play before and he only tried speaking a few times during it. He sits through the Pixar Cars film fairly well. If it's some Disney/Pixar film than it'd be OK if a three year old chatted through some bits, right? We didn't have a specific film in mind, of course. Just a thought.

N's first film at the cinema was way back in the day when there were still intervals. I didn't realise there was ever a time when intervals took place. He saw The Fox and the Hound. Me, I was 6. It was two weeks before my 7th birthday and my dad, brother and I saw Batman. I know all this because someone kept the ticket stubs for me. I can't imagine my mom or dad being that sentimental about it, but for as long as I can remember, the movie stubs have been kept in our family photo album along with my brother's first place ribbon for a mental maths competition and one year's Easter photos with the Easter bunny. It's funny the things that were kept from our childhood.
Written by Michelle Fluttering Butterflies at 09:42