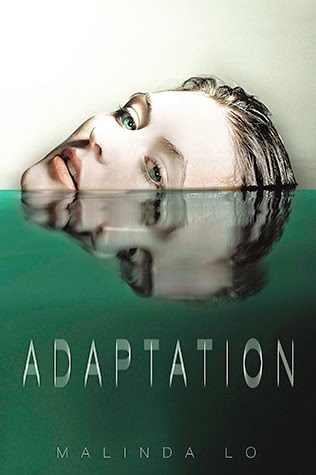 Oooh, I really enjoyed Adaptation by Malinda Lo.  I've been reading quite a few books about teenagers exploring their sexuality a lot this month and it was nice to also read about that in this book where the focus is less on 'gay issues' and more about the science fiction elements and the government conspiracies but also include some questioning of sexuality  as well.  While it is always interesting (and important) to read books about coming-out I think books like Adaptation are important too.  Because while Reese does question her attraction to both a male and female character and while it is important to the story, that also isn't the direction of the main storyline.

Adaptation, right from the first page, left me feeling really disturbed and uneasy about this world that the main character, Reese, is in and what she goes through.  At the beginning or the story, Reese and her debate partner, David, are in Arizona having just competed in a debate tournament. They're at the airport when they see on the news that birds have simultaneously brought down airplanes across the United States and in Canada and Mexico. Reese and David and their debate coach decide to rent a car and try to drive back to San Francisco themselves and I found it really disturbing to witness the birds in this whole situation. Who knew birds could be so creepy? On their way home, David and Reese experience some really horrific things and find themselves in a car accident in the middle of the desert. When they wake up, it's a month later and they are being treated in this secure, private government medical facility.  Reese and David are sent home with lots of questions and no real memories of the past month.  And strange things start occurring back at home that bring up yet more questions...

I really enjoyed Reese as a main character.  I really connected to her as a character, I thought her crush on David and the embarrassment of what happened between them in Arizona was something that come across really strongly right from the start. Through her, we can really feel how much the world has changed with all of these bird problems. And while she obviously feels uneasy about it all, Reese also doesn't let that stop her from pursuing answers. I loved her partnership with her best friend, Julian, and how Reese ends up being pulled into his conspiracy theories with his connections to those with more knowledge and equipment and everything. Plus, Julian and Reese together are both super geeky and I love super geeky.

And then there's Reese and her feelings for both David and Amber.  I really loved how very different David and Amber are in their personalities but also how different Reese's feelings for both of them are as well.  With David, it's more of a slow burn as they've known each other for years and Reese admits to it being more scary to be involved with someone with such a history together. And with Amber it's more of an immediate explosion with Amber sort of barging through the walls that Reese has put up around herself. I feel like the back and forth between David and Amber will be something that continues in the sequel and I really look forward to seeing if my opinion on both David and Amber will change.

Overall, I thought Adaptation was a really exciting and tense read. I loved all of the characters and relationships together. I thought the story line involving the government and the different changes in David and Reese after they're home were really interesting and I thought the developments in Reese's romantic relationship went in very satisfactory directions. I am really excited to read more in this series!  Bring on September and the UK publication of the sequel, Inheritance!