I don't know about you, but for me, education when it came to eating disorders was very black and white. And it was all in extremes. If you starved yourself, you were an anorexic. If you threw up your food, you were bulimic. And that was it. Anorexic or bulimic, one or the other, nothing in between.  My secondary school education was a long time ago though and I hope things have moved with the times. 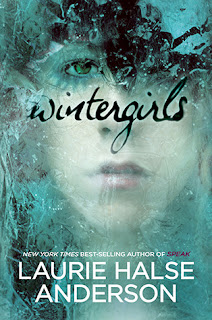 There have been some books that have discussed eating disorders and/or body image/weight over the years. Lots of hard-hitting, uncomfortable reading like Wintergirls by Laurie Halse Anderson. There have been memoirs written, I read a graphic novel once that was interesting in the way the drawings helped to illustrate this character's downward spiral. I come across the same titles. Wintergirls, Just Listen by Sarah Dessen in which the main character's sister has an eating disorder, Massive by Julia Bell, Second Star to the Right. Butter by Erin Lange is interesting as it's about a teen boy with disordered eating. A new book, Paper Weight by Meg Haston has me intrigued, as does Not Otherwise Specified by Hannah Moskowitz.

It's something I find myself drawn to: reading books about characters dealing with eating disorders or reading about the experiences of others that have gone through these things. But I'm curious mostly because I've gone through it myself and reaching out and reading other experiences helps me know that I'm not alone. 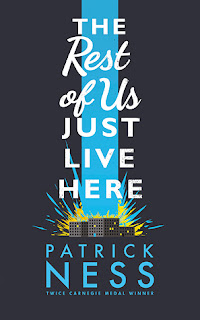 I've been thinking a lot about eating disorders lately.  Mostly because of a conversation that I had with a friend of mine (and fellow eating disorder sufferer) but also because of other things. My post on domestic violence and how we needed to see a range of books discussing the topic at its focus but also side stories. And because I recently read and loved The Rest of Us Just Live Here by Patrick Ness which was a book that dealt with many things (anxiety and OCD amongst other things) but none of them I would consider its 'main' focus. And the main character's sister is struggling in her recovery from an eating disorder. And it was a combination of all of these things that made me realise that I wanted to see a bigger, better discourse on eating disorders in YA fiction.

There are definitely things I'd have liked to have read about as a teenager dealing with an eating disorder.

1) I would have liked to have seen different types of disordered eating. Something that would have shown that eating disorders don't fit neatly into any boxes. It isn't just anorexia nervosa or bulimia nervosa.  There's a big grey area in which some (most?) eating disorders are subsets of anorexia or bulimia or that overlap both of these big-named disorders. Or there could be eating patterns or behaviours that don't fit with either. Or there's binge eating. There is too much there that is not what I learned in school.

I've had an eating disorder since I was in my teens. But it wasn't something I was truly aware of because I did not have an education that helped me to identify that my eating habits would be considered an eating disorder.  I didn't starve myself to hospitalisation. I've never purposefully purged my food. But I do still have an eating disorder. And it has had an effect on my life in a significant way since I was a very early teen. I did begin to notice that things weren't quite right as a teenager, when things went to a more extreme level but for the most part, I was mostly unaware.

2) So much of what I heard about eating disorders has kind of focused on self-image in terms of the media. Perhaps this is more to do with the reasons behind many people's struggles with anorexia, I'm not sure? And the fact that I've probably read more stories about anorexic teenagers than about any other type of eating disorder. But I'd love to see more of an exploration behind some of the causes of eating disorders aside from this need for thinness or perfection or standards of beauty.

I think, in my own experience, there was a lot more about my eating disorder that stemmed from wanting an element of control when things got very emotional and the fact that I have always struggled to handle strong emotions that I was able to channel into the ways in which I did or did not eat. But there were lots of different factors that led to my eating disorder, I believe: low self-esteem, bullying, deteriorating familial relationships, depression. I really want to see a more complex look at the causes of eating disorders. I think that'd be amazing to see. Because while I agree that the media has a lot to answer for in terms of beauty ideals, I feel like there is more to this story than just that one angle.

3) The reason I mentioned my recent domestic violence post is that within it, I mentioned wanting to see a range of types of domestic violence and not just the extreme versions.  So that readers could see it in its different forms and smaller stories. I'd love for that to be more books like Just Listen by Sarah Dessen and The Rest of Us Just Live Here by Patrick Ness in which we see characters who are dealing with an eating disorder but that these stories are side stories to the main story arc. To me, this normalises people with eating disorders. I'd like to see more stories with characters with an eating disorder just in general. And not just the extreme cases. I'd like to see a bigger range of stories about eating disorders.

4) The biggest complaint I have about our discourse on eating disorders has to do with recovery. It feels too often like YA fiction dealing with eating disorders are similar to that of an episode of a soap opera or made for TV drama. By that I mean that too often things are tied up in a neat bow at the end and we're left with this slightly battle-scarred survivor who is cured and we see nothing more. I want to see more of what happens after the HEA here.  I want to see more people realistically struggling with the after-effects of an eating disorder. That even if there isn't an actual relapse that there are thoughts that return to food and eating habits during times of crisis. That's part of what I liked about Mikey's sister in The Rest of Us Just Live Here. That she admits to having bad days and days where it feels like there will be relapses.

And I want to read about that. Because that feels real to me. I'm going through a tough time now and while I am definitely not in the position I was as 16 year old Michelle with an eating disorder, all the same thoughts and coping mechanisms that I had then still occur to me now. I hear bad news, I start to shut down with all the strong emotions and some of my first thoughts are about eating or not eating. And I am 33 years old and a long ways from the emotional wreck I was a teenager. But nobody is telling that story. And I'd like that story to be told.
Written by Michelle Fluttering Butterflies at 08:00